The Following article was submitted for publication by Vivi and is a timeous warning on the danger of alcohol abuse.

‘I’m not an alcoholic’! – many alcoholics claim. The good news is, even if you are, you can be cured.

Alcoholics have been heard to comfort one another with the fact that although they are alcoholics at least they do not have cancer.

Someone by the name of Don who died of cancer, had this read at his funeral:

it cannot corrode faith – it cannot eat away peace

it cannot shut out memories – it cannot silence courage

it cannot invade the soul –

However, unless alcoholism is prevented through abstinence – it can cripple love, shatter hope, corrode faith, destroy healthy diet, drink away peace, cripple confidence, kill friendship, break up marriages, decimate families, kill the body and sometimes (in accidents caused by drunkenness) even kill other, innocent people!

If you had cancer, would you search for some help or treatment?  Perhaps even have an operation to remove it, in the hope that it will not grow again.  Why then, I wonder, do people with a drinking problem take so long to recognize the fact that they might be on the way to becoming an alcoholic and continue drinking when all they need do is get some help?  To abstain means that the alcoholism is arrested – even overcome and the Lord loves overcomers!!

After a few years of marriage, my husband realized that his drinking habit was spoiling our relationship and although he tried to come home after work without stopping for some drinks on the way home, he’d tell himself: ‘I’ll just have ONE beer’ but, after one, his resolve was broken down and he’d come home having had four or five!

I was attending weekly Al-Anon meetings at a local church-hall and after a few narrow escapes while driving, my husband agreed to come to the weekly AA meetings on the same evening.  The meetings were remarkably interesting and educational in that we both learned just how addictive and how poisonous alcohol/ethanol is!

He realized he was actually addicted to alcohol, that is, he accepted he was  an alcoholic and kept trying to shake off the addiction, which some of those attending the meetings had managed to do, though certainly not all of them!

When I say, ‘shake off the addiction’ and in the heading: ‘you can be cured’, I should make it clear that there is no cure, except for abstinence and the addiction is only successfully ‘shaken off’ when it is no longer being fed!  That is only possible it seems, with the help of God.

In AA’s “Twelve Steps” the word ‘God’ is mentioned four times, and ‘asked “Him” to remove our shortcomings’ in the seventh step.  However, now, in order to keep those of differing faiths accepting, they call the Lord a ‘higher power’. For me – He is the Highest Power! 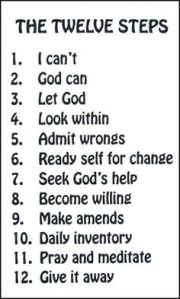 After a few ‘slips’ my husband asked the men at our Bible study evening to pray for him, because he really wanted to be free of the addiction.  They got up, stood around him and prayed for him.

On only one occasion after that did he drink and the result was he fell down the stairs from the garage to the house!  When I arrived home he tearfully told me it was his fault, because he had had a drink!  But after that, he never looked back!  He had seen his folly, made up his mind, asked the Lord for the strength and received it.  He has not touched alcohol since then; nearly twenty years ago!  We are so grateful to God with whom nothing and no-one is impossible!  (However, He does not force them)!

So the answer to the question of how to deliver your loved one from the clutches of alcoholism is: you cannot, but the Lord can and will.  However, He waits for the person who is addicted to ask Him and commit themselves to His guidance!

When alcoholism/nicotine addiction/any drug addiction has been in our family we need to forewarn our children that they may be susceptible so that they are forearmed.  Although no-one knew anything about DNA when the scriptures were written onto scrolls, God did – and He warned us that the sins of the fathers would be visited on the children to the third and fourth generation.

It sounds like a gong of doom, but it is not a curse, it is a warning!  God inspired the prophets to warn us (because He loves us)!  So if your dad is a heavy smoker, or your granddad was a heavy drinker, not only should you be aware that these habits can become addictions, but also, be aware that the susceptibility can be passed on to the next vulnerable generation!

God does not blame the children or punish them for what their parents did, see Ezekiel Ch. 18, in particular, vs 20, we can inherit traits (strengths and weaknesses) and susceptibilities from our parents, grandparents and even great-grandparents, especially when the traits are on both sides of the family!

Although the advertising of cigarettes has been stopped in this country and a warning of the danger of lung cancer is now printed on the packets, there is no warning on bottles of alcohol, that alcoholism could be the result of consuming the contents!  It is socially acceptable to have a drink and good times are continually advertised on television, interrupting your entertainment and ‘brainwashing’ you to get started or to have another drink!

Scriptures that tell us to guide and teach our children: Deuteronomy Ch. 4 vs 9: ‘Make them known to your children and grandchildren’ (your seed and your seed’s seed).  We are encouraged to keep God’s commandments so that it may go well with us and with our children after us, so that we may ‘prolong our days/live long on the land which the Lord is giving us for all time’.

‘I will appoint you as a covenant to the people, as a light to the nations, to open blind eyes and free those that walk in darkness’.  If people cannot see that they are becoming addicted, they are blind to the disaster that could be lying ahead – and the Lord wants them to be free of that bondage – to whatever substance!

So the answer is to pray for those who suffer from alcoholism or other substance abuse and then encourage them to ask for help! They need to get to the point of acknowledging that they are addicted and the Lord will answer their prayer.

If you feel this article has value, please send this link to others, Writings are meant for people, not for dormant files in our computers and very often when we share them, it results in positive changes in the lives of individuals and communities.